My first proper trip this year (2013). I decided to use my Easter break from school to visit my daughter, in her final year at Glasgow School of Art, and combine this with a trip to two beautiful Scottish islands, though completely different in terrain and atmosphere.

The weather in Glasgow was cold but beautifully bright and sunny. My daughter showed me a side of Glasgow I did not know. It is indeed a fascinating city, interesting architecture, beautiful parks, rivers and canals, more varied and diverse a city than I had ever realised.

It is a city designed on a grid system, however, dominated by large one way road systems, and a motorway, hurtling with a constant thunder,  into its very heart

The evenings were freezing, but crystal clear under starry bright skies

Then I headed out of the city westwards to Ardrossan to pick up the Arran ferry. 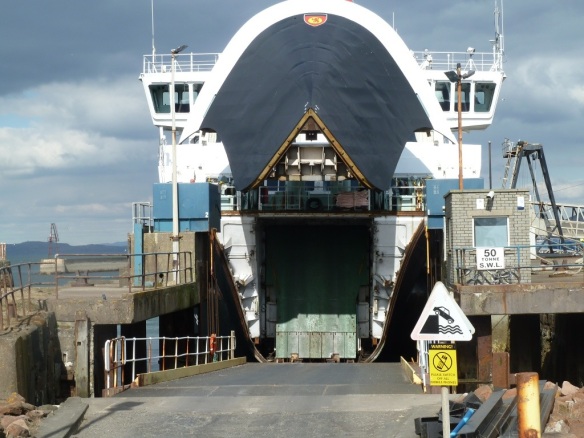 Arran looks beautiful from any angle, and in almost any weather. And the weather for my trip, though pretty cold, was terrific. Clear, blue skies and almost unbroken sunshine.

I rode from the ferry port, Brodick, anti clockwise around the coast to Kildonan where there is a small beachside campsite.
I didn’t do much more that night than shower, (terrific hot showers) cook tea, watch the sunset and go to bed.
The next day, I had decided on a southern circuit of the island taking in the Ross Rd, the String Rd and then back to the campsite. The weather was still wonderful, although the mornings and evenings were sub zero. It was a great ride, cold enough to stop me overheating on all the climbs, although I was careful to zip up my jacket on the descents- the icy air was viciously sharp as I rode down to Lamlash on the Ross road, so cold my face was numb as the descent evened out and I turned on to the main road, heading out of Lamlash towards Brodick.  HereI stopped at a little restaurant on the main drag, Eilean Mor, where I have always found the soup homemade and hot. Just what I needed after that freezing descent.

Back on the bike and up to the String road. This is a bit more open than the Ross Rd the whole way through: hardly any trees at all. Still a bitingly cold wind on the descent though. I stopped at the high point and went for a little ramble. I found what looked like a pleasant wild camp spot and made a mental note to break camp tomorrow and head here for one night in the mountains before heading off to the ferry.

The next day was pretty leisurely. Watched the sun rise from my tent, despite having to let the cold air in to do so. It was worth it. And besides, I had anticipated the chilled nights and brought both my summer down bag and my three season one, so was toasty warm wrapped up in a silk liner plus two down bags.

Scrambled eggs, toast and tea on the beach again, still with one sleeping bag wrapped round me. Then a leisurely decamp and transfer to the spot I had found the day before. I picked up some food in Blackwaterfoot, before returning to my mountain camp and cooked a simple meal of couscous tuna and vegetables. As the sun went down over the hills, I supped a dram, listened to the owls and finally fell asleep, only to wake up about an hour later, freezing because I had forgotten to zip up the tent, so transfixed had I been by the beauty of the stars that clear, cold night.

Broke camp next morning and then headed about 30 miles or so to Lochranza where I  booked into the hostel for the night. This hostel has been completely refurbished and is no longer the dirty, dismal, damp and mouldy old house it once was. Lovely communal rooms, a good kitchen with one wall restored to the original stonework. Warm cosy bedrooms. What an improvement.

Did the tourist thing walking round the harbour, rambling over the ruined castle and talking to the red deer here which are much tamer than the ones up in the hills (still not tame though, be careful).

Next morning, I loaded the bike up , having used the hostel to get myself and clothes clean again, and headed out, freshly scrubbed and presentable enough to share a ferry with normal people.

It’s not a long ferry ride to Claonaig, and then a short 5 mile or so ride to Kennacraig for the ferry to Islay. That trip is much longer, about 2 hours and the ferry was full. 20 years ago it seemed hardly anyone went to Islay apart from those who lived there and a few single malt buffs. Now, it’s quite a popular destination. And when you are there you can see why, instantly.

It has an atmosphere all its own and quite unique, lonely, distant yet homely and welcoming at the same time somehow. Can’t quite explain why, but that is how it feels. Maybe it’s something to do with its wide open spaces, endless skies, desolate moor, yet turn a corner and watch the sun spread its warmth across the fields and the stacks of peat drying side by side, while the hills of Jura lend their perfect mountain outline to Islay’s lonely skyline. It is an island of surprising and intriguing contrasts.

I spent two days here, camped on a beach by the sea, just riding out and back each day. One day on the eastern side of the island, my favourite part, long stretches of silver sand reaching out in front of your bare, cold feet. Freezing morning paddles to wake you up, and few other folk to disturb your rest and relaxation here. And one day, I rode over to the western side, where most of the distilleries are located as well as the biggest two villages, Bowmore and Port Ellen.

I stopped at the cafe in the airport- great coffee and delicious homemade biscotti. As far removed from a Londoner’s version of airport as you could find. No flights landed while I was there- just a few other people in the cafe and a chatty cafe manager with time for everyone. Rode down to the Oa where people with the biggest binoculars you have ever seen, scan the wild cliffs for eagles and other birds. Then back, to the other side of the island and my little camp spot in the dunes. Yet another beautiful sunset and a night of clear, freezing skies heavy with stars.

I had to be up very early the next day. I had thirty miles to cover before 9.30 to get the ferry back to the mainland, the first leg of my ride back to Glasgow, where I was expected that evening. As I crept out of my tent in the still dark, I could tell there were clouds in the sky for the first time since I arrived in Scotland. The stars had disappeared completely. And the wind, although brisk the whole time I had been north of the border, had become stronger, colder and filled with freezing drops of rain, that stabbed my face and hands like tiny needles as I tried to break camp. I had packed most things and just left myself a cold breakfast to eat as quickly as possible. By the time I left my camp spot, the sun was just coming up behind dismal clouds and the wind seemed not to want to let me leave, forming an invisible wall that I forced the bike to move through, slowly, my legs feeling every turn of the pedals to be some mighty superhuman effort. I began to get a little worried. I had sixty miles or so to do today and these first, flat thirty were meant to be the easy ones! The thirty crossing the Cowal peninsula had nearly 4,000 feet of climbing in them. At this rate I would be hard pressed to make the ferry in time.

Luckily, the wind eased as I turned the corner on the coast and headed in a more northwesterly direction for a bit, and became more of a cross wind for some of the miles. I was still quite tired by the time I reached Port Ellen, taking the exposed road nearer the coast when I realised the head wind had switched a bit. I made the ferry in time, and by the time it docked at Kennacraig, the rain had cleared and the wind had dropped.

I rode the 6 miles to Tarbert, where I realised that thirty miles into the wind had left me absolutely ravenous, so I ate my cheese and oatcake lunch with a few tomatoes at the quay waiting for the Cowal ferry to Portavadie. It’s a little boat and just a half hour hop across.

Then 30 miles of what is really either up or down untill you get just a few miles from Dunoon. The climb fromTighnabruaich is a long, long one. But the view of the Kyles of Bute at the top is worth it. Then a long glide down. I stopped at the viewpoint where two cars had already paused, and the friendly occupants were sharing their opinions of the surrounding countryside. They had both passed me on the way up the climb and expressed amazement that I had made it so quickly. This puzzled me- i must have been doing 5mph at the most, but I think motorists routinely understimate the speed of a bike. I guess they had not expected to see me again that day. 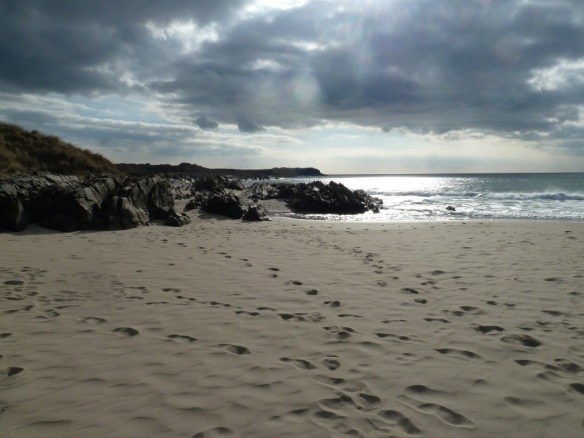