Early morning. Dark as midnight in the city on these autumn into winter days. Rain soaked city roads, wheels rolling over a bright glittering sparkle of red, green and gold shimmering over black tarmac. Me and the bike moving on, the shower so heavy, it feels we are just wrapped in a sheet of rain.

I’d taken a waterproof jacket, but had stuffed it in my saddlebag and, kept thinking this rain might be a heavy shower. By the time I realised it was a torrential extended down pour I also realised I was completely saturated, 2 layers down. Seemed pointless now to put on the jacket. The riding would have to keep me warm.

Finally, as the sun rose, the rain eased a little and soon me and the bike were no longer in the city, but heading out on country lanes. The clouds were still dark and heavy, so not trusting that doubtful sky, I headed straight down to Dorking to test this new route of mine. Missed out Box Hill especially as the new route just turns round and heads back down. No need to recce that in the rain and heavy clouds leaving no chance of that sweeping view from the top that makes it worth it. I headed straight out through the centre of Dorking on the Reigate Rd to find Coldharbour Lane.

This is the first climb on this shorter route and so felt a touch less challenging than usual. Approaching it from this direction, no Box Hill or those other little bumps and climbs south of Dorking on my usual route were in my legs, and I’d now reclassify this as one of the easiest climbs on the route.

The sunken lanes were wet, the edges lost in deep puddles, piles and heaps of wet leaves. The clouds were now clearing quickly and even though the air was still chilly, where the sun streamed through the branches, you could catch its warmth.

In autumn, the views from Leith Hill open up as the leaves drop and foliage thins. So I decided to take a trip up to the tower, having missed the Box Hill viewpoint. The clouds, almost gone, the sun, fully out and the clearing sky mostly a bright crisp blue. As I was on the road bike, I headed to the easy track up. However, it was so wet, muddy and buried in autumn leaves, it became harder and harder to keep the wheels turning. So, I hid it in the trees off the path and walked the last bit. I did finally put in my waterproof jacket, just for an extra layer in case it was cold on the top. My clothes weren’t dripping wet anymore but still very, very damp.

The tower was fairly busy with mountain bikers, dogs and walkers. There are so many trails and paths around the hill that I had passed nobody on the way up. The little cafe was open so; hot chocolate time! The view was worth the scramble!

I slipped back down to the bike. Or where I’d left it. A little moment of panic as I’d hidden it so well It wasn’t where I first thought!

Then back, down, bumping and sliding a bit on those last few yards to the road.

Road conditions weren’t great either, too much water, mud and rotting leaves to ride anywhere but near the middle but there seemed to be fewer cars than usual on Leith Hill so not too much of an issue. Not as many road riders either. On Sundays the hill is usually busy, but it was the mountain bikers rustling through the undergrowth alongside who seemed to be out in greater numbers. Understandable. These kind of conditions can be fun on an mtb whereas road riders tend to prefer drier rides.

The Friday St turn was marked by a diversion sign directing cars that way and indicating road closed on the main lane. I decided to forego a trip to Friday St this time to check the extent of the closure.

It was just passable by bike, as I informed the group heading towards me when I came out the other side.

The rest of the route, was a classic autumn Surrey Hills ride, low sun sparkling through the trees, soft and golden, reflecting the colours of the leaves still clinging to the branches.  The fallen now deep drifts of russet, gold and warm brown, the woodland seemingly glows softly around you. The personal stresses of the week and the anxiety of the time seemed to drift behind me and disappear on the very gentle breeze that nudged me forward softly.

The trip to Leith Tower had added at least half an hour to my trip so I was running short on time, and had to miss my usual Peaslake stores stop. The lanes, climbs and descents preceding it needed much more caution than I usually need to take, due to the mix of gravel, mud, piles of leaf litter hiding the ruts and potholes which seem to be increasing every time I visit.

I headed for the last big climb up White Down, crossing the railway and passing the sign for NCN 21 which is essentially an off road track here and in my opinion, is not worthy of the NCN title. It does however lead to an off road ascent of White Down which is easier than the on road climb, following the contours of the hill in long steps up and at a lower point on the hill than the road climbs. But, today I was on road.

However, White Down, like the Coldharbour climb, felt easier than when it’s the last climb on the much longer ride I usually do here. Not that I climbed it any faster! Still my usual slow pace, passed by five other riders heading the same way. But, even when that last kick up right at the end of the climb hit my wheels, I wasn’t gasping for breath at all. Getting too old for all that lungbusting stuff.

Ranmore Common was its usual lovely rolling reward, where pedalling hard means you get a glorious glide of a ride, spinning out along the route, big blue skies above. The little coffee van was in the car park so I stopped for a mocha and chatted to some mountain bikers about their route today.

A train was due at the tiny station in Westhumble. If Im not riding out and back, this is my preferred station to leave from. Especially after a glorious ride like I’d had, where I’d forgotten the city and felt a long way from the traffic, pollution, big roads. Riding back to Dorking along that awful main road destroys that feeling of calm and peace and brings you back to reality just a bit too quickly. Much better to pick up the train here, small station tucked into the side of the wooded hill, autumn sun streaming down on the platform.

I realised as I sat down on the train, that the ride I’d started almost immediately soaked to skin, I was finishing practically dry. The train pulled out of the station, the Surrey Hills behind us. Perfect autumn ride.

Took the road bike out today. It’s been a while. And I’ve not done much riding apart from work riding since getting back from Scotland a couple of weeks ago. Put together a route from my favourite bits of “close to London” Kent. Although couldn’t face the ride through Croydon so took a train to Coulsdon and started ride from there. Farthing Down, through to that tangle of lanes south of Bletchingly, Oxted with lovely odd names, Guildables, Dwelly, Dairy. Up Trevereux Hill, which must be the smoothest best kept bridleway anywhere. Through Limpsfield Chart, those wooded lanes golden glowing green at this time of year. Used Clacket Lane to get back up to the Pilgrims Way, brief coffee stop at The Velo Barn

Parked the Sabbath September outside amongst a fair smattering of carbon. Pinarellos, Colnagos. You know that sideways, speedy glance we all cast over another rider or group of riders bikes when we think the owners aren’t looking? The Sabbath got a few of those. Often slightly puzzled ones as I’ve removed all trace of what it is from the frame. People tend to think it’s an old gun metal grey steel road bike. it’s the down tube levers I expect.

Back on the road for a lovely roll along the Pilgrims Way. Perfect day for it. Made my way to the Otford turn off, then chose Filston Lane to head to Shoreham and then up Fackenden Lane to Magpie Bottom. Bumpy rough descent and climb, descend and climb and finally twisting and turning through another tangle of old Kent lanes till I got to Knatts Valley. Perfect day for that. Then Farningham, Sparepenny Lane and in no time at all the green lanes became lined with houses and shops with a brief respite in Jubilee Park . Before you know it you’re in Bromley, Beckenham Place Park then home.

60 miles. Good day to be back on road. A real Londoners Kent Classic

Below this post are Barry mason’s original FAQ’s for the ride. Most of it still holds true, apart form the details about the coaches, which wont run this year, too much uncertainty around level of Covid restrictions to organise, and the great Waldingfield feed stop. This no longer exists. But other pop up feed stops along the way. Check the Facebook group for these.

Barry was instrumental in keeping this ride going towards the end of the last century when it was almost dropped because the numbers booking couldn’t cover the costs. His solution, reduce the organisation to a minimum , make it a turn up and go ride with one feed stop, no other support, let folk sort themselves out. And they did just that. He also got the coaches organised, back then with Greenwich Cyclists and later with Southwark Cyclists. He was coordinator of both groups in his time as a cycling campaigner. He had terrific and infectious energy, a love of both the natural environment, and the city and a belief that if we try hard enough we can make our communities safe and healthy spaces to live for everyone, preserving the best in the them and creating better spaces where needed.

Ten years this month since he died, too young and too soon. The Dunwich Dynamo is now one of the most popular night rides in the country. And that original model has since been copied by others, notably the Ride to The Sun from Carlisle to Cramond and the Exmouth Exodus, from Bath to Bristol. If Barry was still with us, you can bet he would most likely have been riding those two this year, as well as the DunRun. I’ll be raising a glass to him at le depart this year. London Fields 24th July 2021

“Mummy, mummy, the eagles are coming to get us!” I looked up, but the slice of blue sky visible above the high, ragged rocks was clear and empty. We were just finishing a steep climb up on a road that … Continue reading →

12 weeks since I’d  ventured beyond the M25 that signals to a London rider the city is now well behind you, rolling over one of those smaller old roads that’s either been buried under or swept up and over the … Continue reading →

Right foot down, follow on and off, pedalling down the empty street, gathering pace, legs spinning more than usual as this old frame of mine now only has the one gear. 5am. A few notes of birdsong hanging on the … Continue reading → 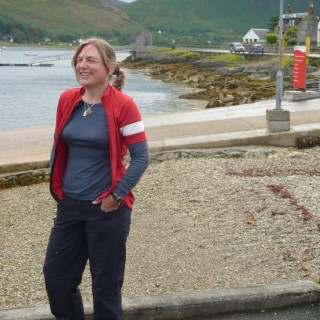