12 weeks since I’d  ventured beyond the M25 that signals to a London rider the city is now well behind you, rolling over one of those smaller old roads that’s either been buried under or swept up and over the motorway.

My way out took me under at first. The potholed surface of Chelsfield Lane that rumbles roughly up and down, dipping under the big road through two dark concrete tunnels less than a mile from each other. The lane itself, in spring and summer, becomes a tunnel in places, but a much lighter and brighter one, arched with the leafy branches of trees from each roadside, filtering the sunlight.

The final stretch of Chelsfield Lane dips a little, then a bit more down the other side of Well Hill, to give you the first proper descent of this ride.  I couldn’t resist lifting hands off the handlebars, spreading my arms wide and doing something we used to do when young and foolish.  It’s as close to flying as you can get as a kid, riding down a hill, no hands, (well, apart from riding off the edge of first floor scaffold planks on a building site, but that’s another story. Which didn’t end that well, if I’m honest).  And, for a minute or so, I was ten years old on a bike again, doing something stupid, but enjoying it.  It goes without saying, I don’t recommend anyone do this, by the way. Cover your brakes at all times, is the cycle instructor’s sensible and recommended mantra. 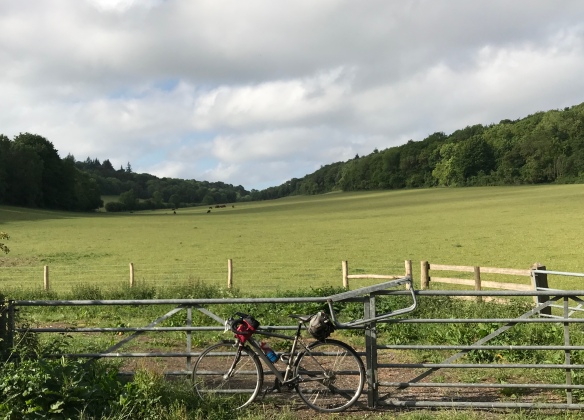 Luckily the bike flew safely over every rut and pothole on that rutted lane and I arrived at the T junction at the bottom, hands safely planted on the brakes pulling slowly to a stop. Here is Timberden Bottom, with Shacklands Rd weaving through the valley. From here the road sweeps gently up and down just a touch to the turn for Shoreham.  It was here I realised I was going to be early for my meet with a friend I hadn’t seen since well before lockdown. So I did an extra little circuit to the Badgers Mount roundabout, exploring a little off road track to complete the circuit back from the Orpington bypass on to Chelsfield Lane again!

This time, I turned right on to Shacklands Rd and was soon on my way to our meet point in Otford, through Shoreham, along Filston Lane.

Now we were two!  We had no clear route planned, just thought we might include Knatts Valley in the ride somewhere, and that my lack of miles and hills recently and my need to ride all the way back home might limit our miles a bit. So we headed up to the Pilgrims Way.

Not having seen each other for a while we were chatting and socialising rather than punching out the miles, so the pace was easy. Also, pausing in our chat, we realised we needed to turn left at some point or else I’d be heading so far out it would be a long ride back for me!  We had missed Cotmans Ash, which I’d vaguely thought we might use, so Terrys Lodge Lane was our way back up on to the ridge, but mid conversation again, we sailed past Knock Mill Lane without realising and once crossing the main road it was a nice surprise to find I was on a stretch of road new to me! Doesn’t happen often round here. The southern section of Ash Lane. So chose Billet Hill and Crowhurst Lane as our route to the valley.

I then realised I rarely use this route now as it leads to  Knatts Hill Lane, a rough, potholed winding track, which is not as car free as it was years ago. But we were there now so down we went. And yes, we had to brake and slow to avoid a few vehicles.

On to the valley road.  A great roll through, no motor vehicles for a change but a few other riders to greet. It’s always tempting to blast through because it’s that kind of road. But that means it’s over quicker, always a shame.

At the end we headed to Farningham and sat down by the river for our cake and coffee. Then made our way to the road that overlooks the valley below, riding along together almost to the end where it turns down to Eynsford, and I said goodbye to head up SparePenny Lane and back north to the city, about 15 miles away.

Couldn’t have had a better welcome back to Kent.

My route, mapped when home from memory, was sort of this…so usual caveats apply! 52here