Plumpton is a great train station! Just 50 minutes from Clapham Junction and you’re minutes away from a glorious off road trail up on to the South Downs. Was a bit of a last minute idea, but the core of it was a wish to watch the sun go down by the seaside and a memory of riding to Cuckmere Haven with my daughter about 15 years ago! 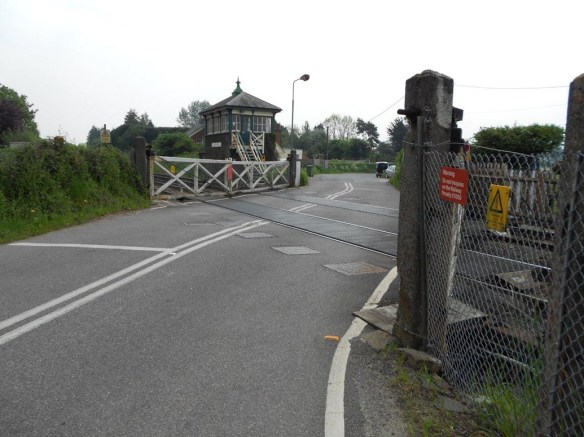 So, off the train, and heading south to a track that leads up on to the South Downs.  Plumpton Bostall.

I made the mistake of thinking that a couple of dry days would have made everything dry. Nope. Still muddy in places, and a slippery mix of mud and chalk sometimes.  Weather glorious, so the occasional slip and slide was rewarded with clear wide skies, sparkling clean air in every breath on the climb and, on topping out, that sweep of views spreading out for miles, winter clear light still, fading  to a slight haze in the far distance.

Rode a stretch of the South Downs Way to Ditchling. Back on the road and then down. I didn’t want to hit the main road so turned left on to a woodland track and after a little bit of riding around sticky paths I ended up in a place called Stanmer. A lovely discovery. Pretty church and tea room.

From here I took a quiet road which led on to the cycle route alongside the A27. Which isn’t great. Could be so much better if it was properly maintained and adequately signed. Same old story.

Turned off this to take the road through Rodmell, Southease and Piddinghoe to Newhaven. At Newhaven, I searched out the a track called the Vanguard Way which took the bike along rough tracks, a hike over a railway bridge, more rough tracks, then what seemed to be an old, decayed small goods railway submerged here and there  under pebble beach and a realisation the sea is suddenly right beside you!

Then Seaford and the sea beside you for a few miles more. I wanted to see Cuckmere Haven again.  As I came to the end of the mapped road, I paused, wondering whether to head back up to the main road from where I could access the northern side of the Haven that I knew from years ago.  A voice asked me if I needed help. A local man, in his eighties, an off road enthusiast!  No longer able to ride the South Downs, he entertained me for quite a with a few stories from years back, No mountain bikes then. All done on an old three speed. “The tyres were the thing,” he said.  Good, heavy treaded tyres.  He pointed out the route up to Seaford Head and informed me I would also find  a track to Cuckmere Haven, but the southern side. Just as beautiful, he assured me.

So that’s what I did. Up the concrete track, through to the rough tracks down to Cuckmere Haven, England’s largest undeveloped estuary. Nestled in a crook of the South Downs, a narrow river plain alongside the Cuckmere River.  Then back up and along to Seaford Head. 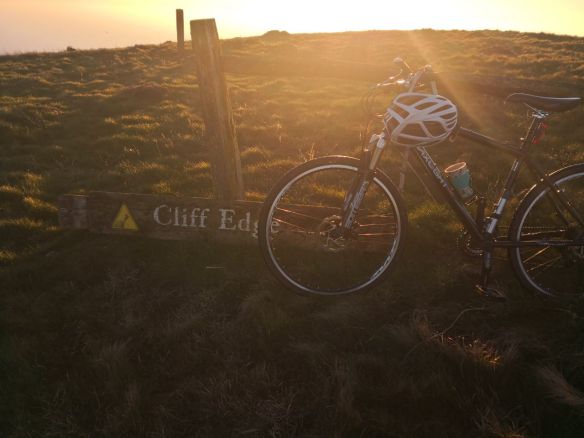 The sun was low now. So I turned along the coast path and rode back towards Seaford.  Rode most of it slipped and slid the very steepest sections, then back on to the pretty decent wide shared seafront path. As the sun sank lower. Finally I had to tear myself away from the sea and head up to the station. 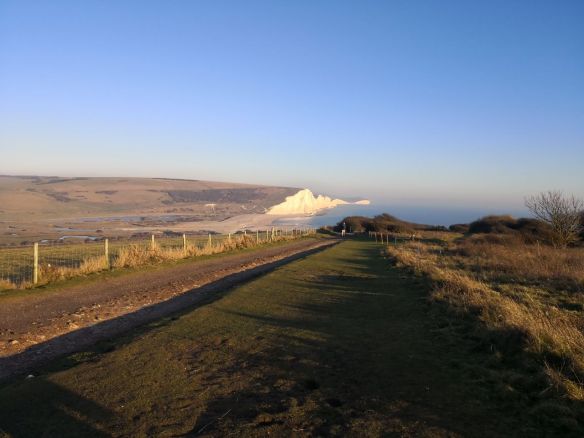 Although unplanned and largely made up on the hoof, map in hand, this proved to be a terrific, if exhausting day. 25 miles doesnt sound much but coupled with 12 miles to and from Clapham Junction,  few miles exploring alternatives en route, and a fair bit of picking up and carrying the bike,it felt equivalent to a 60 hilly miler! I have since identified a better off road alternative to the mean and nasty Newmarket Rd.Will have to try it soon!