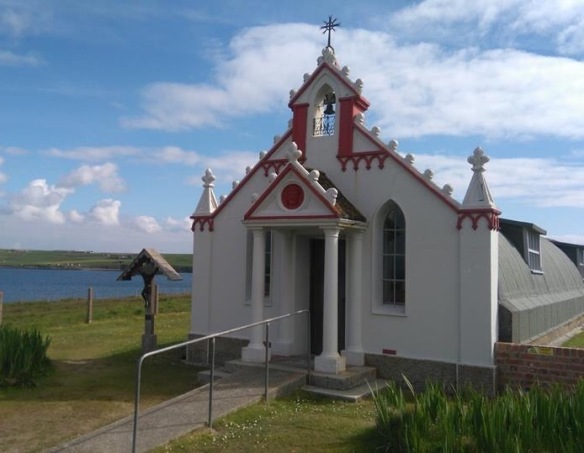 I wonder why I have never thought of coming to Orkney before, given how much cycle touring I have done in nearly every other part of Scotland in the past. Perhaps because It’s north and east rather than north and west, the direction I’m usually headed. And also because access to the ferries that bring you over is via the A9, the far northern section of which I am not a fan. It’s narrow and very busy with big trucks. Not the best cycling experience in my opinion.
However, there are options which allow one to avoid it, especially now my daughter is living in Helmsdale, right at the end of a strath that has a handy road (or train) that can take you up to the north coast too.So, up on a Tuesday night sleeper train to Inverness. I still love this sleeper, even now it has been taken over by a new franchise that seems to have ditched the wonderfully cheap bargain berth option. The staff are still invariably lovely, and if you book very far in advance, its still worth it for a treat. The seats are still available at more affordable prices, if you can hack sitting up all night. They’re bigger than the usual seats and can recline a bit. The staff used to bring you blankets if you asked. I don’t know if they still do, because I did pay a bit extra for a berth. Slept right through. Didn’t even wake up when the trains are separated at Edinburgh and head to their individual destinations of Fort William, Aberdeen and Inverness.

Then, in the morning, from Inverness up to Helmsdale. I decided to train it this time, to give me more time with my daughter, although there is a lovely route I have ridden before, doable in a day, especially if the Cromarty Nigg ferry is running. But don’t make the mistake I did, a few years back, neglect to check the ferry beforehand, arrive to find its cancelled due to the wind, then have to ride across the top of the Black Isle into the very headwind that stopped the ferry from running. Makes the journey much longer and much tougher.

In those days there was a hostel in Helmsdale. On the previously mentioned occasion, I was so tired by the time I eventually got there that I couldn’t face finding a pitch for the tent so decided to check in at the hostel. By now it was getting dark, the whole village seemed empty of inhabitants , so I rang the hostel number from a phone box. (That’s a clue to how long ago this was!) The warden could probably hear I was too tired to listen to the very simple directions she was giving and finally said, “Just pop your head out of the box, dear, and look up the road.” I did so and could see a small figure a few yards up on the corner of the main road waving at me. Within a few minutes I was inside, enjoying the hot cup of tea she’d made. Friendly welcome, warm bed. Sadly the hostel is now closed, sold by the SYHA a while back. A tale that I was to hear again on this trip. The building is still there at the top of the village.

But that was then. Now, I spent a couple of days with my daughter, rode up the strath on a glorious summer day, broom and gorse in vibrant bloom, along with dozens of other little wild flowers I couldn’t name. Sand martins nesting in the sandy deep banks of the Helmsdale River, a couple of salmon leaping. Paused a while at the slightly eerie Baile an Or, where a short lived gold rush never really delivered on its promise to the hopefuls who arrived here, prepared to live in a shack village in the hope of making their fortune. You can still hire gold panning equipment from the Timespan museum and art gallery in Helmsdale and have a go yourself. There is indeed still gold in them there hills which washes out into the river here. 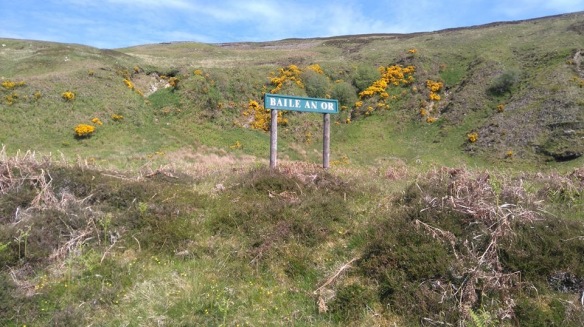 Baile an Or: Site of Scotland’s 19th century gold rush

On one of the Spring golden hillsides overlooking Helmsdale, is a white stone, high up in the hill.  If you look at my photo carefully, you might spot it, near the top on the right. It’s not naturally white.  My daughter told me it was painted white as a protest against the Iraq war. And there it is still, shining white in the yellow at this time of year, later in the year,  white in the purple haze of heather.  Even here, about as far from Iraq as it feels it could be, someone felt in their heart this was a wrong, wrong thing and wanted to express that dissent. 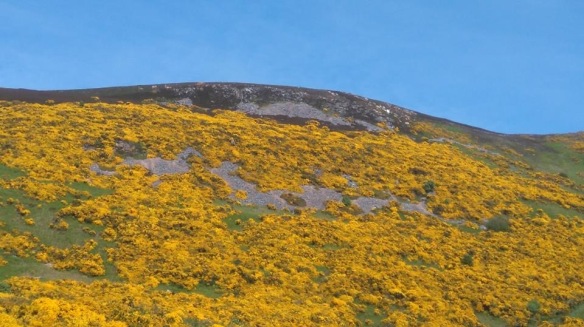 Oh the broom, the bonny, broom. and the white stone of peace, high up. 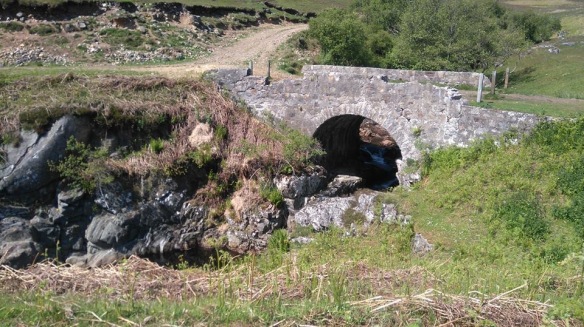 Then, having already ridden the road from Helmsdale up to the north coast unencumbered by my camping kit, the next day I cheated again and took the train to Thurso. From here I rode along the coast road to Gills Bay. This stretch of the coast road in the east is much flatter and easier riding than the western section. I passed Dunnet Head and was tempted to ride out to it, but didn’t want to risk missing the ferry, so stopped and took a look from a distance and then carried on to Gills Bay. Here there is a small ferry which takes a shorter route to the Orkneys, landing you at St Margarets Hope on South Ronaldsay.
St Margarets Hope is a small village with a shop and cafe. 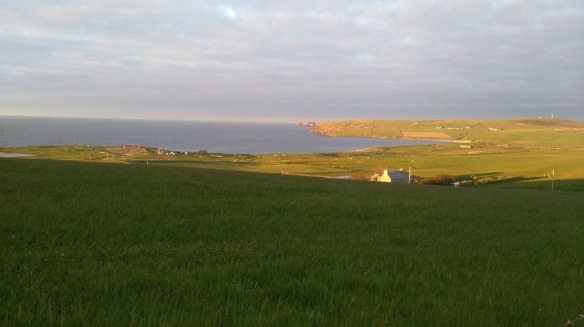 Approaching the causeway to Burray

I stocked up on food for a couple of days tea then rode down to the south of the island, half contemplating a wild camp. It was getting late, although that’s not too much of a problem at this time of year when darkness doesn’t descend till around 11pm and then it’s not really darkness, but a slight dimming of the day. But I was tired and nothing seemed suitable. Wild camping always sounds so romantic, but, having done a fair bit of it, the reality can be messy and uncomfortable if you don’t choose a good spot. It was windy, so I needed shelter, a good fresh water source and flattish ground. All I could find was bumpy, steep ground littered with large lumps of sheep poo and no useable water. The small streams marked on the map were sluggish and dank looking. It was a beautiful evening and I didn’t want to spoil it, so sat down overlooking the sea for a while and decided to ride back to a camping sign I had seen on the way down.

And glad I did. One of those spots that is almost as good as a wild camp, a field next to an organic farm run by a lovely guy, Mike Roberts, who will sell you fresh eggs and organic veg, if available. It overlooks a lovely beach that is just a few minutes walk away. Fairly sheltered from the strong northerly wind too, which, though cold, brings a lot of sun and dry weather with it. I blethered a wee while with Mike, originally a southerner like me, who knew Maidstone! But had been here for years and obviously loved the land and knew how to care for it.
I decided to spend a couple of days here, and use it as a base to explore as much of mainland Orkney as I could. Planned a couple of out and back trips. The first a trip south and around Ronaldsay. A real feast of beach and birds. Eider duck families with little ducklings in tow. Curlews and oystercatchers desperately trying to distract me from their nests, the latter often flying alongside me for ages to lead me away from their offspring. Evening walks down to the beach, windy sunsets. There is an old churchyard right next to the sea here. And a walk which takes right to the southernmost tip,of Ronaldsay. I’d definitely recommend the campsite. Basic, but beautiful.