Well, not really. An evening and morning in Glasgow with my daughter, then a train journey to Oban and then, Coll.
Hot, hot, hot. Well 22 degrees anyway…which is hot for this part of Scotland, especially in May. Standing waiting for the ferry to Coll, I had to dig my sunglasses out of my bar bag, the bright sea glare of the sun was beginning to hurt my eyes.
I have been spending large chunks of my spare time somewhere in Scotland for many years now, and there is still a lot of it I haven’t seen. Among these places, the Isle of Coll. A three hour crossing, sea flat calm, brilliant, sparkling, I spent most of that time out on deck, in a short sleeved t shirt. I think that may have been a first for me. Of all the Scottish ferry journeys I have made, and there have been a fair few, I don’t think I have been able to stand bare armed up on deck for more than half an hour or so, even on the finest of days. 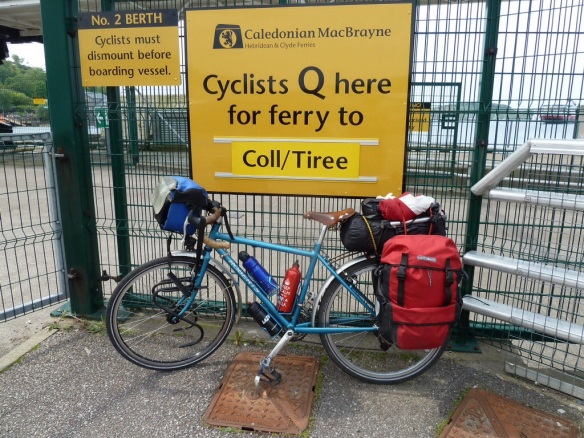 As the ferry neared the little island, however, the wind began to whip up, and the clouds began to pile in. The view of Mull in the distance, so clear for most of our voyage through the Sound of Mull, began to fade.

Rain had indeed been forecast for later that evening, which decided my choice of camping spot for me…I had been looking at maps and thinking about heading to one of the dune beaches on the other side of the island…….but with bad weather on its way, I was tempted by the free camping field in a field behind the hotel. Easy access to hot showers, toilets, a warm place to hide if the weather got really bad seemed a more attractive option. I rode out of the tiny settlement of Arinagour, the main place on the island and rode round to where the field seemed to be on the map…just to check it out first…it looked OK, empty, and there was a fine view of the sea from up there with some sheltered spaces to pitch out of the the wildest blasts of wind and rain. So I rode back popped into the hotel, as you are asked to tell them if you wish to use the field. I spoke to a man who appeared to be serving himself behind the bar, and he proceeded to tell me about the field. He spoke with authority and I assumed from his manner, he was the landlord. I told him I had looked at the field and checked again with him that it was where I thought it was…he began to tell me I was mistaken, it wasn’t on the right, it was on the left and began to give me directions which confused me entirely…then he cast his eyes to heaven and said, “What is it with women and their complete lack of of sense of direction?
The barmaid looked a little uneasy at that point…I think she had noticed my eyes narrowing and the look on my face (I may have been growling and baring my teeth). “My sense of direction is fine”, I said, “at least, it has been good enough to get me across Europe on a bike in the past and back, with a tiny road map, so maybe if we start again?” At that point, the landlady appeared, and it soon became apparent that this guy was just a bloke drinking in the bar, and he had not realised (because he had not listened to me) that I had taken the road up to the camping field, which does lead you to view it from the right, but he was directing me from the track next to the hotel, from where it is on the left.
I pushed the bike up the steep track, past a rather ugly, aggressive looking church, to the field. 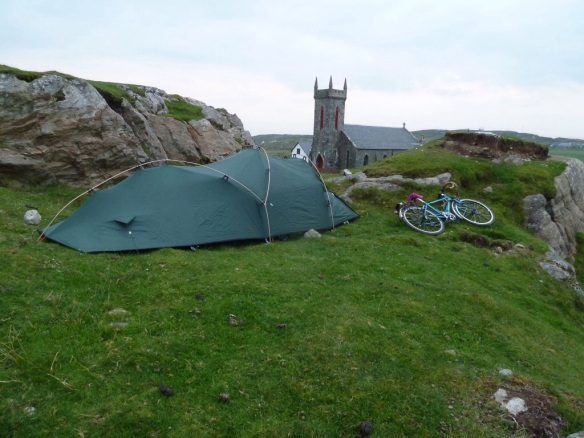 By now the wind and rain was really setting in, so I chose a sheltered spot behind a rocky outcrop and pitched as quickly as I could. The Man from the bar appeared again, ostensibly offering assistance (politely declined) but I suspect to see with his own eyes, a woman pitching a tent without male assistance and hopefully prove his prejudices to be correct as I was sure to make mistake after mistake. I am sure he didn’t believe I could possibly do it without something going wrong and I was almost certain that, the usually simple job I can do in a few hitch free minutes would, on this occasion, be hampered by all sorts of problems, just because he was watching. However, this proved not to be the case and the tent was up, the Trangia out and boiling water, and tea made and offered to him in possibly the shortest amount of time I have ever done it. Result!> 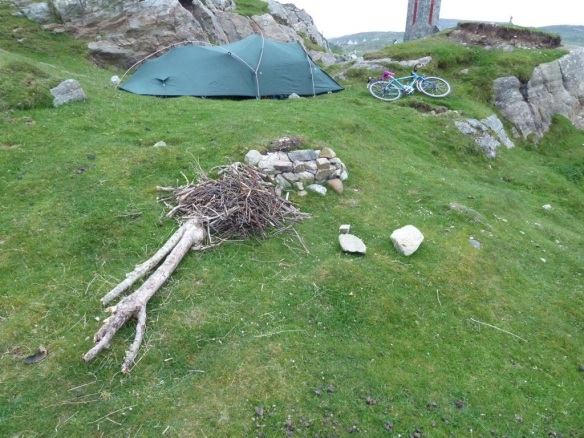